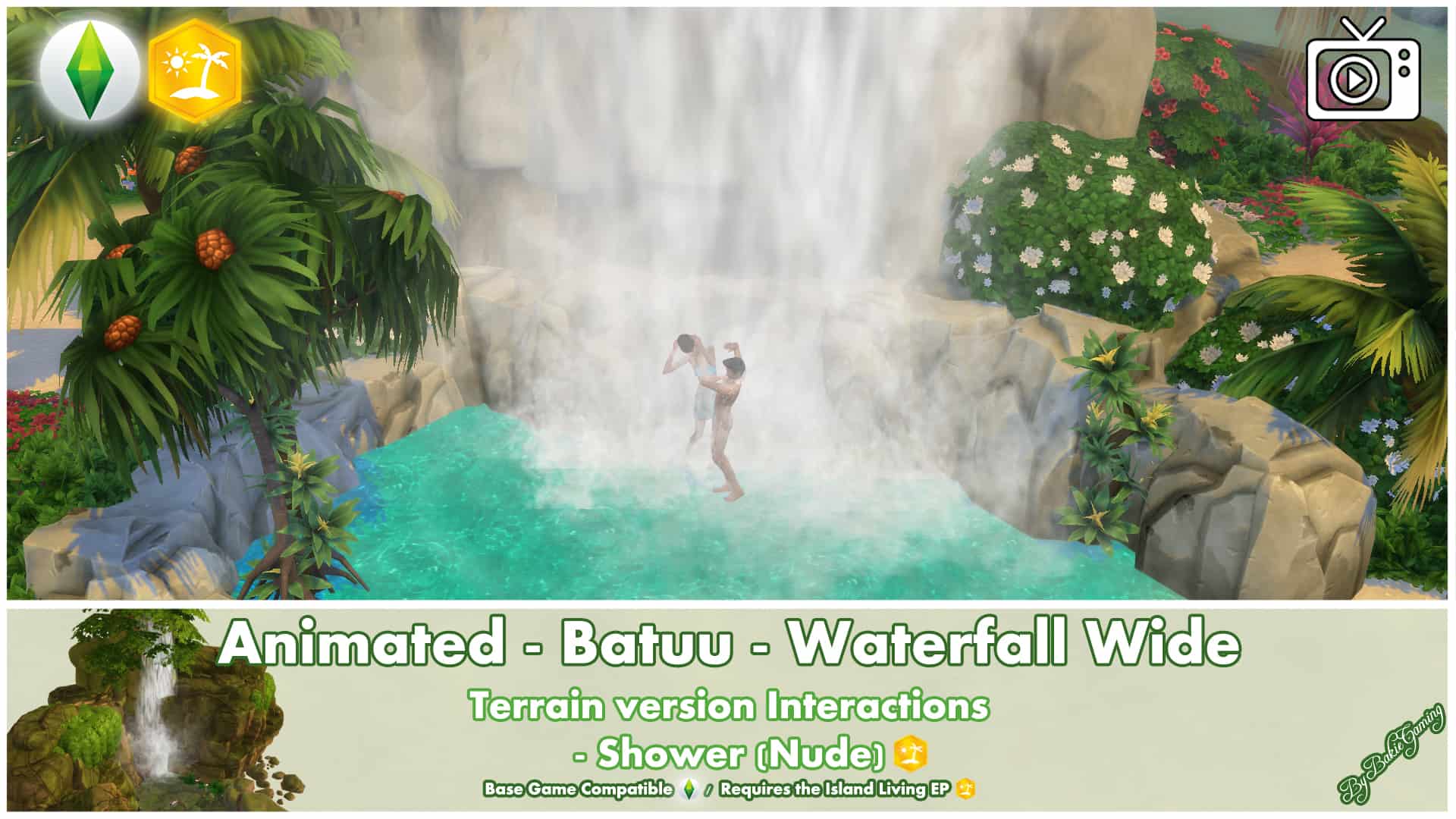 Animated – Batuu – Waterfall Wide
My first animated placeable waterfall! This waterfall can normally be found in Batuu, the world that came with the Star Wars – Journey to Batuu Game Pack.
From the three waterfalls that can be found in the resistance district, is this the largest one.

For the following other interactions you will need the Island Living Expansion Pack:
– Shower (swim wear)
– Shower naked
– Play in (solo)
– Play with (There has to be another Sim nearby)

For placing on the water surface:
Move the object as far to the border of the pool as possible, but keep the footprint green (So don’t activate MOO). Then move the object one step/tile away from the border and start rotating it clockwise, while holding the ALT-key for free rotation, until the footprint turns red. Now rotate it back until it becomes green again and release the mouse button to place it. When going into live mode, the waterfall should fall in line with the grid.

For placing on terrain:
Start with placing the object in line with the grid horizontally (Press G for grid activation in build mode). Now rotate the object clockwise, holding the ALT-key for free rotation, until the second arrow from the footprint barely touches a vertical grid line. Release the mouse button and go to live mode to see the result.

I’ve tried to explain a bit how to do this in the images I’ve added, but for a better view of everything mentioned above I recommend watching the video.

Object information:
This mod is Base Game Compatible as for the effect and sound of the waterfall ( and the gather water interaction).
If you want to have the ability to let Sims shower and play underneath the waterfall though, the Island Living Expansion Pack is required.
These are Standalone objects, so they won’t override any other objects in game.
To find it, type “Waterfall” into te search bar or go to the Pool Decoration section in build mode.
It can be recognized by my “BakieGaming” icon in the lower right corner of the thumbnail.
The costs are: 1000 Simoleons

I hope you like this Animated Waterfall and if you do, please leave a comment!
If you want to use it in screenshots or videos, be sure to give me some credit!

Additional Credits:
Thanks to the Sims 4 Studio
Thanks Adobe for making Photoshop