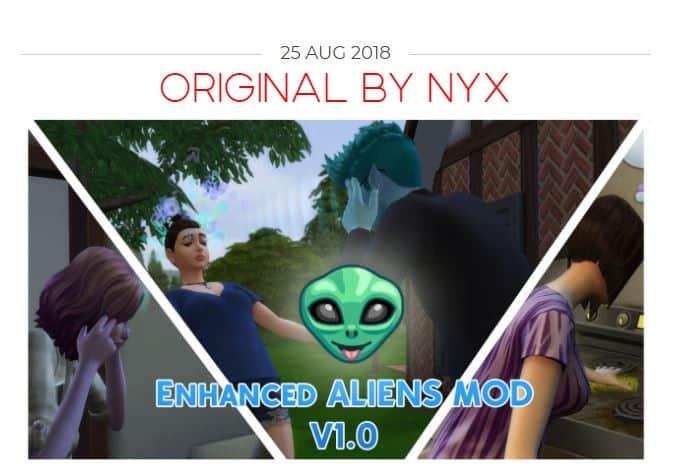 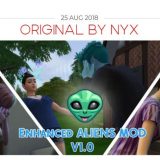 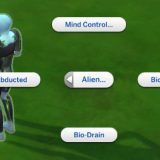 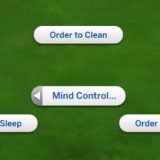 I DID NOT MAKE THE ORIGINAL MOD, ALL CREDIT GOES TO NYX. REMAKES ALLOWED AS PER NYX’S SITE.

So, in the process of making my Occult Bloodline mods, I hit a wall at the time of making the Alien Bloodlines because, uhm. Aliens are boring ok. I thought I might have to go and actually make something to, well, make them less boring, but then I found out Nyx’s mod existed. But it didn’t work.

I call this a “frankenfix” because I tried to refrain from making any non-essential changes and mostly coded around the preexisting mod to fix the issues I found.

The main issue I noticed was the trait not showing up on Rewards for pre-existing Aliens, nor was it being gained by Aliens when aging up. So I just made it trigger by being an Alien and going to sleep. Have fun.

The other issue, which I found out about thanks to the S4S forums, was that Brain Power was not regenerating via any of the actions that supposedly restored it. So I went and added a different hidden buff to increase Brain Power when resting since I couldn’t figure out which part of the original was causing this, and then I added a different loot to Nyx’s custom Restore Brain Power interaction. So that should work now.

Aside from those fixes, the Mod is as the original was, which I’ll detail below. I couldn’t find the original MTS post so I’m just linking a post I found about it. If anything else is broken that I didn’t notice, please let me know and I’ll get to it!

Okay, so paraphrasing Nyx’s since, like I said, I can’t find the original.

When your Alien Sims go to sleep for the first time since having the mod, they will become Enhanced Aliens. Nyx’s original methods (aging up and reward store) remain in the code, but are not functional going off my testing, so just go this way.

Once your Aliens are Enhanced Aliens, they’ll be able to:
– BioDrain and BioBoost other Sims: Draining another gives them a +3 Dazed moodlet while giving the Alien a +3 Energized buff, and the opposite is true for Boosting, as the Alien will become +3 Dazed while the target is then +3 Energized. These all last an hour.
– Mind Control: Aliens can now command other Sims to either Clean or Repair, both for about 4 hours, during the duration of which Sims will be +10 Dazed.
– They have a new need called Brain Power, which overrides Bladder and Energy a la Vampire-energy bar*, which is maxed at 100 points and will be decreased by using Alien abilities.

*NOTE: I noticed they don’t seem to be properly hidden when I had the Hybrids mod installed, but it seems to be a purely visual conflict considering how Nyx’s code prevents Bladder/Energy from decaying anyway.

Low Brain Power follows the negative Energy messages trend, just with the text replaced by Alien stuff.
Brain Power can be restored by sleeping or by clicking on your Alien Sim and using the Alien ability of Restore Brain Power.**

**The special effects for restoration don’t seem to be triggering and I am sadly a potato when it comes to animations so I couldn’t get that to work, but the restoration is functional. You just won’t see the pretty special effects.

There is some overlap between the resources edited by my version and GOOD_BOYgoneBAD’s, namely the Alien Interactions:

Unless you use mods that affect the Buyable Trait Tuning and/or AgeUp Interactions involved in their version, I recommend GOOD_BOYgoneBAD’s version.