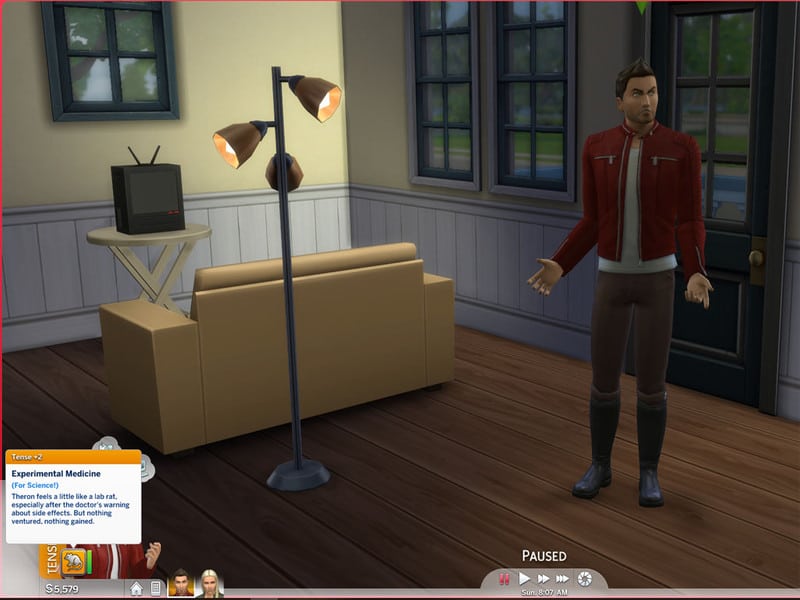 The Male Pregnancy Trait is designed to provide a more realistic experience for pregnant male Sims.

I’ve always felt the male pregnancy experience in the Sims 4 could be improved so this is my attempt at making the gameplay a little more challenging and unique. I’ve approached it from the standpoint of a risky, advanced medical procedure that a male Sim has chosen to undergo.

In addition, there are over 50 custom moodlets, most of which occur during pregnancy. These include: False Labor, Prenatal Vitamins, Sore Back and Swollen Feet, just to name a few. Some of them also come with custom buff tuning; being Dazed and Confused from fatigue and low blood sugar while pregnant also means your energy/vampire energy decays more quickly. It might be best that your Sim take a nap when that moodlet shows up! While they’re not all negative, many of these moodlets are designed – like Biological Changes – to be extreme. Fighting past the discomfort your Sim is feeling when pregnant should not be easy.

Along with the custom moodlets, I have re-purposed many already in-game moodlets to simulate things like mood swings, as I very much wanted the experience to feel a bit like mad science. For example, if you have the Vampires game pack, you may see “Mysteriously X” emotion pop up as a possible result of said experimental medicine. If you have the Cool Kitchen Stuff pack, you may see the ice cream moodlets like Plant Matter appear as “nutritional supplements”. If you have Spa Day or Outdoor Retreat, your Sim might come home from work with a Fertility treatment or potion. NONE of these expansions or packs are required; I’ve done my best to cover as many bases as possible within the confines of the base game, too.

CAVEAT: Because of the sheer number of moodlets I’m trying to re-use, I may have chosen some that don’t exactly match with the trait theme as I didn’t have their in-game text available to me and chose it because it sounded like it might work in context. Even with rigorous testing, I haven’t seen all of them. This also goes for icons for custom moodlets; when available, I chose ones available in the base game.

The trait also comes with a whim set.

While the trait is called Male Pregnancy, I’ve done my best to make it transgender friendly. Rather than using male/female as my test condition, I’m using pee standing up/can be impregnated, although many of the moodlets use he/him as pronouns. Please make sure to select “Can be impregnated” and “Use toilet standing” during CAS character creation to ensure this trait functions as intended. It will also work for male Sims who have been abducted by aliens. I do not intend to re-create this trait for women.

� Broadcasters: Currently, adding broadcasters with MC4 causes the game to load very, very slowly (in excess of 15+ minutes). I’ve alerted Zerbu, but for the time being I have removed the broadcasters I added to the trait until this is fixed
� Tattoo: A CAS overlay to force a tattoo (I’m thinking wrist barcode) to Sims that have the trait
� More Moodlets: I’ve hit a creative wall which is why I’ve decided to publish rather than sitting on this trait for another few months
� Custom Interactions