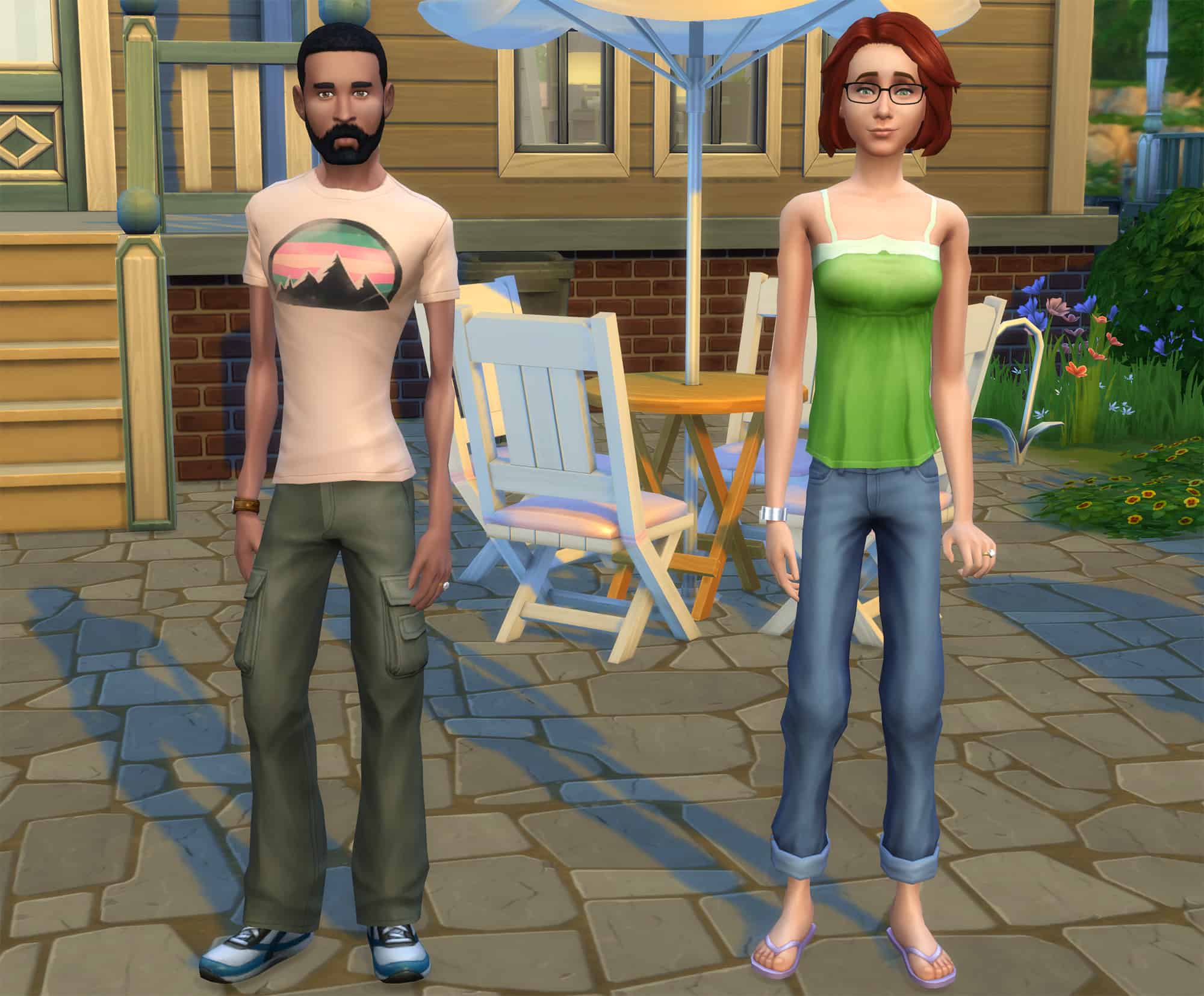 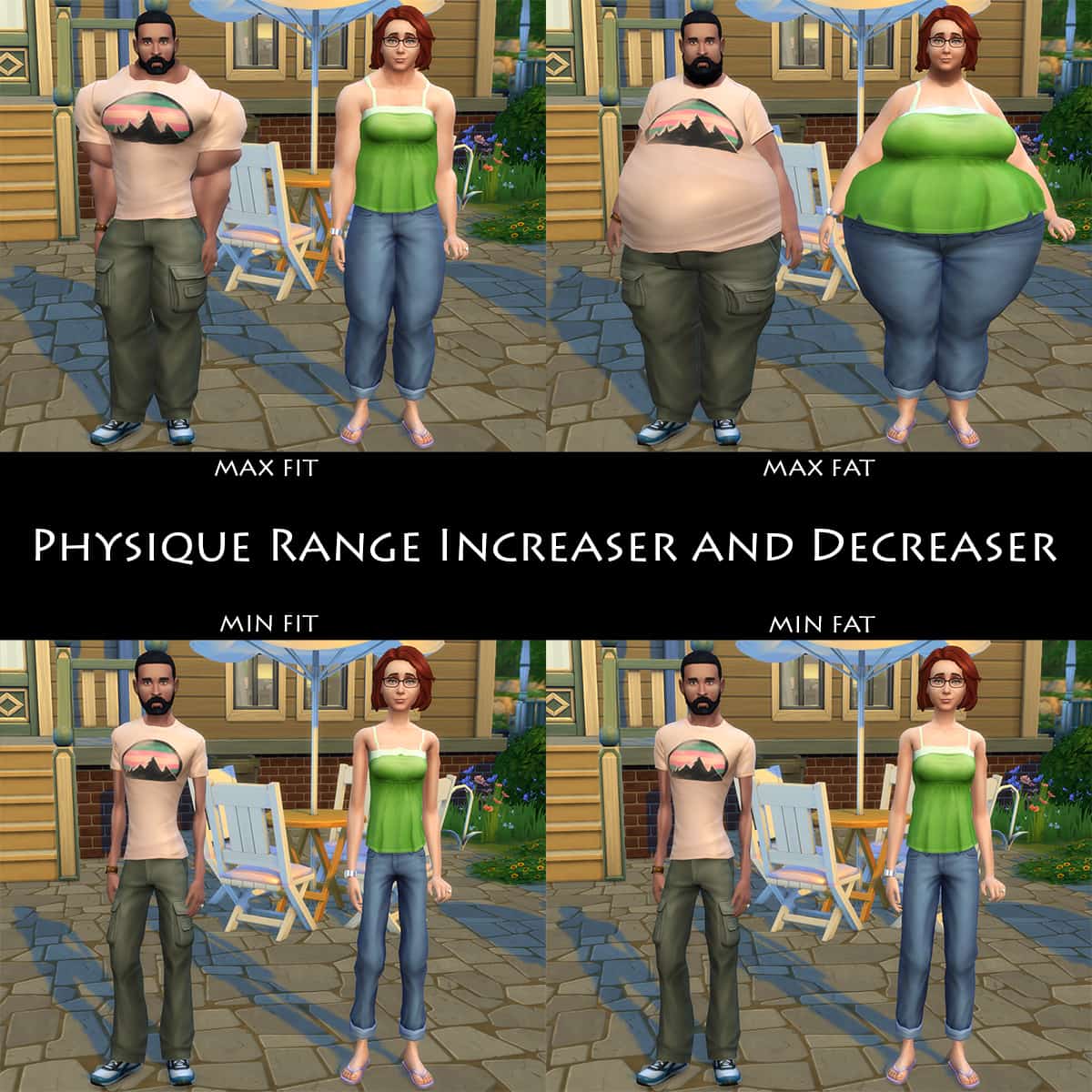 What this does:
Increases or decreases the visible range of attainable Sim body shapes, fit or bony, fat or lean. Depending on what version you choose, your Sims will be able to achieve either hugely muscular, hugely fat, or rail thin body shapes, all through standard in-game interactions such as working out and eating. The decreased-range versions will keep all Sims in a smaller-range of fitness or fatness or both, depending on what you choose. The greatest decrease-version will effectively keep all Sims right around “0” fitness and/or “0” fatness (default middle-slider body-shape), again based on what you choose. Be aware that this is a global change. Townies and NPCs will be affected as well.

All 21 versions have been tested working on the most recent Cats and Dogs patch version of 1.37.35.1010. It -may- work on older versions, as the functions involved have changed little since the initial release of the game.

What this does not do:

1 – Make it more difficult to increase or decrease fitness or fatness. With the more extreme multiplier versions, your sims will visibly change in large amounts with just a bit on the resistance machines/treadmill or even a single snack.

2 – Allow the increased range to be seen within CAS, while modifying a Sim, or creating a new Sim.

This mod by Sirdaubeny on Tumblr seems to increase the range in CAS by a multiple of 3 (you still need to swap clothing for your changes to “pop” in): Sirdaubeny’s Tumblr (Might Need an Account)

Recommended mods for testing what version you like:
Deaderpool’s MC Command Center is an excellent mod, and includes “MC CAS” settings to modify your Sim’s physique in real time without entering CAS. Just enter a range of fit and fat values from -100 to 100.
You can find it here: Deaderpool’s Patreon

Disclaimer:
***Please test this on a new neighborhood first to see what version will work for you. I am not to be held responsible if this breaks your game-save.
***Please also be aware that the more extreme ranges, both fit and fat, min and max, will deform your sim’s body shape into something less-than human looking. I would recommend no more than the 200% version (X3p0) with fit or fat. The decrease-versions show no such deformation, as the physique ranges attainable are within EA default ranges.

Installation:
***Please only use ONE of the 21 available versions at a time. You cannot mix and match them, hence why I provided 21 different versions.

1 – Download the .zip file of your choice and extract the zip in your download folder. Navigate into the newly created folder.
2 – You will then see a single “.ts4script” file which you then copy into your Sims 4 mods folder, usually located at: %userprofile%DocumentsElectronic ArtsThe Sims 4Mods
3 – Start Sims 4 and make sure to check off “Script Mods Allowed” under Game Options –> Other. You should restart the game if this was not checked to get script mods to work.

Technical Explanation:
This is a simple injection script that writes over the “_set_fit_fat” and “_get_fit_fat” functions found the “sim_info” class, a part of the game’s simulation core that deals with all Sim “objects.” All it does is literally multiply the physique_range upon setting the sim’s physique by a static multiple (_set_fit_fat) and then, when the game calls to retrieve the sim’s physique (with _get_fit_fat), the inverse of the previous static multiple is multiplied through. The game handles this nicely, by visibly changing your Sim’s physique, while leaving the default fit and fat ranges alone. This allows the sim to not “snap” back to the maximum defined range upon calling either of these functions, effectively expanding how fit, bony, fat, or lean your sim can become.

Conflicts:
Any injection script that writes over either of these two sim_info functions:
(_set_fit_fat)
(_get_fit_fat)

This is a multi-part download:
Please only use ONE version at a time!