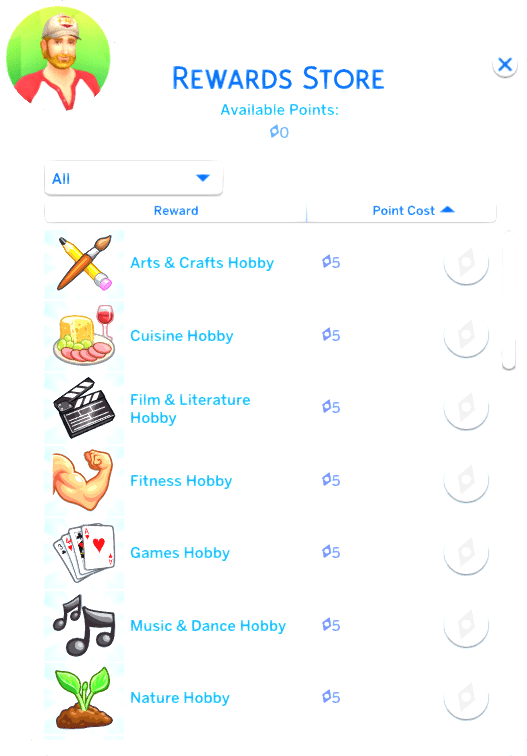 After the success of The Personality Mod, I set about creating something similar but a little different. That something is The Hobby Mod.

You Will Need:
Scumbumbo’s XML Injector ~ This makes the traits show up in the reward store. Don’t worry; the XML Injector doesn’t add anything to your game, it just allows this mod to work as intended.

What Does It Do?
The Hobby Mod adds 10 reward traits to the Reward Store. Each of these traits are inspired by the ten Hobby Tracks from Sims 2 Freetime: Arts and Crafts, Cuisine, Film and Literature, Fitness, Games, Music and Dance, Nature, Science, Sports and Tinkering. Each trait costs 5 Satisfaction Points.
Additionally, each trait can be added via an interaction, found under the Actions menu.

The Whims
Right now, each trait has a collection of Maxis whims attached: I have plans to include many custom whims for each trait in a series of updates.

The Technical Details
This mod is Base Game Compatible. You’ll see additional whims if you have the following packs installed:

Known Issues
No known issues at this time.

Conflicts
This mod doesn’t conflict with any other mods at this time.

Planned Updates
In the future, I plan a few updates for the mod:

– Custom Whims: These will come in groups for each trait so watch this space.
– Randomise Hobby Interaction: Will allow you to randomly select a hobby for your Sim.
– Interactions: More interactions to discuss hobbies and learn about other Sim’s hobbies.

Credits
Without the following people, this mod would never have come to light:
Scumbumbo for creating the XML Injector and Triplis for updating and maintaining it.
Zerbu for the Mod Constructor
The creators of Sims 4 Studio
Origamika and Julia for translating!