Traits for the Offspring of NPCs Mod 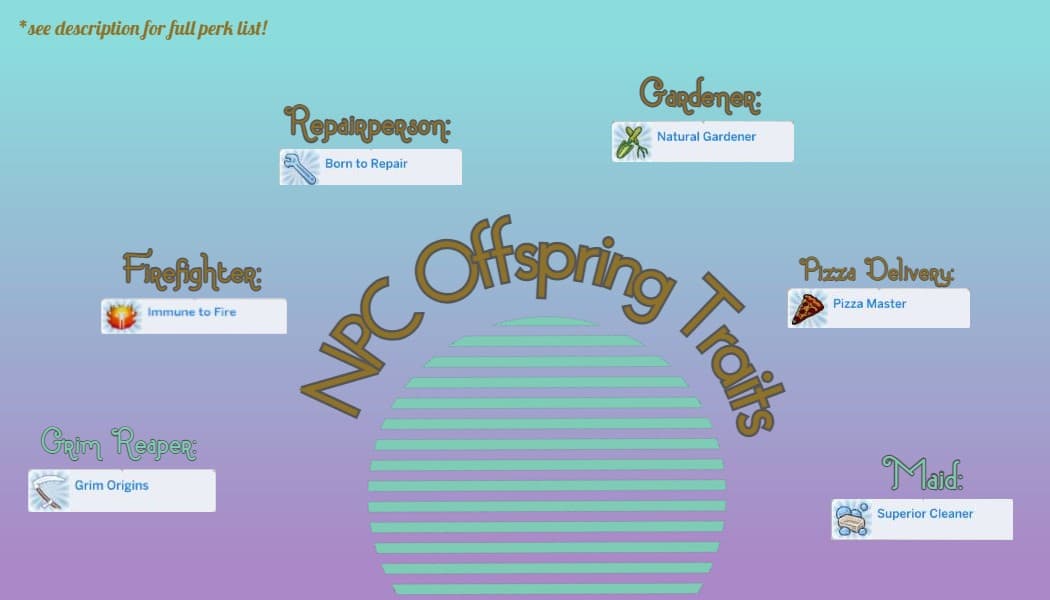 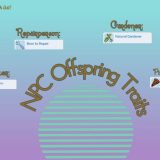 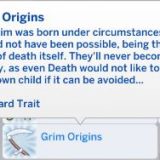 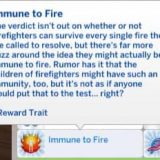 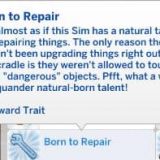 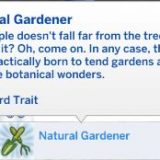 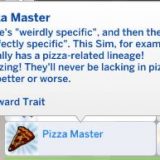 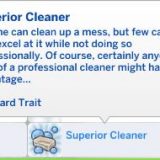 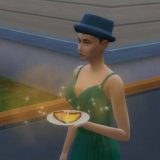 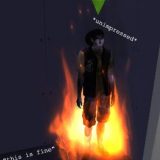 Traits for the Offspring of NPCs Mod

I emphasize this mod will not enable you to have children with NPCs that can’t have children in the basegame (like Grim etc.). You’ll need other mods or cheats or general creativity to make the actual kids happen.

So, we all know NPCs. Things like the Grim Reaper and Father Winter, and those randoms you sometimes let into your house to clean or fix stuff for you. They’re useful, sure, but they don’t really get much love. Seriously, only Father Winter has perks for his children in-game. Wouldn’t it be joyous if that weren’t the case?

Without further preamble, let’s get to it. As has become a trend with my trait mods at this point, you will need MAL22’s Trait Tracker Injector for this mod to work. These are inheritable gameplay traits. This mod is also BaseGame-Compatible, but one version of a trait has additional options if Discover University is at play.

With this, a few select NPCs will now grant their offspring a bonus trait! Note that the NPC traits are no longer valid if you add them to household (unless you use some NPC manager to prevent that), so if you want your children to get the respective trait from their NPC parent, you have to make sure the parent has the relevant NPC trait (IsGrimReaper, IsGardener, etc.). That tends to be relatively easy to check by the red letters from their situation job above their name, though you could also use something like MC CAS to check their hidden traits.

TL;DR: I tested the inheritability of all of them and it works, so make sure your NPCs don’t lose their NPC status if you aim for their children being the children of NPC being a relevant thing. “but I moved in with the firefighter and the kid didn’t get the trait” Yeah, that’s the sort of headache I’m trying to save you here, most of the NPC traits are straight-up NPC-only, so if you make them playable at all they will no longer count for this. So like. Please keep that in mind so that your Sims can actually get the traits.

So after that explanation, that may or may not come from my paranoia of people not being able to get it to work if they make their NPCs no longer be counted as NPCs, I’ll explain the traits tied to the offspring of NPCs. It was originally 5, but now 6 since I added Grim Reaper as per a suggestion on Tumblr. Actually, if you want me to add any more NPCs, by all accounts ask. I tried to keep it as BaseGame-Compatible as possible, but I’m not opposed to adding any NPCs people might have interest in, since I’m keeping them as separate packages anyway.

So, presenting within the spoiler:

Six traits for the children of NPCs to inherit!

Grim Reaper’s offspring
Trait: Grim Origins
Will never reach the Elder age, with Adult being their max age. Thus, cannot die of old age without outside influence.
Will never be saddened by anything

Firefighter’s offspring
Trait: Immune to Fire
Cannot burn to death. Note that this works by locking the stat that registers burning from fire, like in the case of ghosts, but they will still get singed if they catch fire. It just shouldn’t be able to progress to the point where it would prove fatal.
(One of the vanity images shows this trait in action)

Repairperson’s offspring
Trait: Born to Repair
Even untrained, their handiness skill will be almost as effective as the maxed handiness skill.
Sadly I couldn’t make repairs autonomous since they normally can’t be, but if there is a woodworking table on the lot, they have ten times the chance of choosing to woodwork autonomously.

Gardener’s offspring
Trait: Natural Gardener
Even untrained, their gardening skill will be almost as effective as the maxed gardening skill.
If there is a garden or plants on the lot, they have ten times the chance of them choosing to tend the garden autonomously.

Pizza Delivery Person’s offspring
Trait: Pizza Master
Click on self, there will be a new Pizza Master pieMenu from which they will be able to summon slices from the in-game pizzas. If you choose the version for Discover University, this will include the Discover University Pizzas (so 6 pizza options instead of the base game 3).
(One of the vanity images shows this trait in action)

Maid’s offspring
Trait: Superior Cleaning
They have a ten times higher chance of cleaning up messes autonomously.
They have the same cleaning effectiveness/speed as a Sim with the Speed Cleaner trait.

Tragic Clown’s offspring
Trait: Tragic Origins
They are cursed to be a wereclown, becoming a semi-tragic clown during the day.
This is definitely not the result of my frustration at fixing the Werewolf mod.

Wow, that was longer than I thought it would be. If you ask me, I absolutely love the Pizza Master trait (was a wild ride to make but still), and the most boring one is Superior Cleaner, but hey, I said more NPCs needed inheritable traits, so now more NPCs can have inheritable traits.

Like I said before, if you want me to add any, just let me know. I wanted to make Nanny’s offspring with a Parenting skill bonus but I only got Parenthood recently, and it wouldn’t be basegame compatible that way, unless I made a version with Cooking or something. Bah. For now, I’ll leave those 6 since I think for now they’re as basegame-compatible as it can be.

Any future plans?
Definitely. I’ll add more NPCs to this if requested or as I figure out ways to make them compatible, but in the meantime, I’ll probably be working on my other mods as well as potential fixes to Nyx’s still-broken mods.