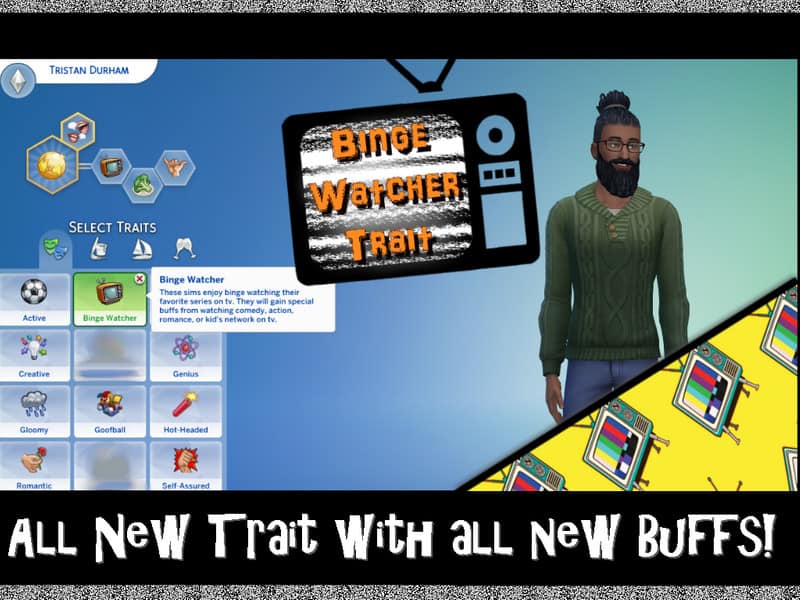 Woohoo! My first trait! This was a lot of fun to make, and I hope you all enjoy it as much as I do. It’s a pretty simple one, a hobby type(the picture shows the wrong category sorry. Didn’t want to re-do that screenshot after I fixed it! lol). Basically sims with the Binge Watcher trait really enjoy watching TV–Action, Romance, Comedy, or Kid’s channels to be precise.

Binge Watchers get four new buffs from their trait:
–&Streaming Esteem&buff adds +1 Focus while watching the channels mentioned above. Everyone knows how concentrated you can get while watching a really intense series! This buff goes away once the sim is done watching TV.

–&Chill& buff adds +2 Happiness during your binge session that lasts for four hours. Nothing is more relaxing than spending a day just watching TV. Aaaah..

–&Longing for Lounging& buff adds +1 Discomfort randomly when your sim does certain activities like working out or reading. They really don’t enjoy other activities as much as watching TV.

–&Not My TV!!!& buff adds +1 Tension while your sim is repairing their broken television set. A broken TV is terrible for anyone, but it’s an extreme tragedy for Binge Watchers.