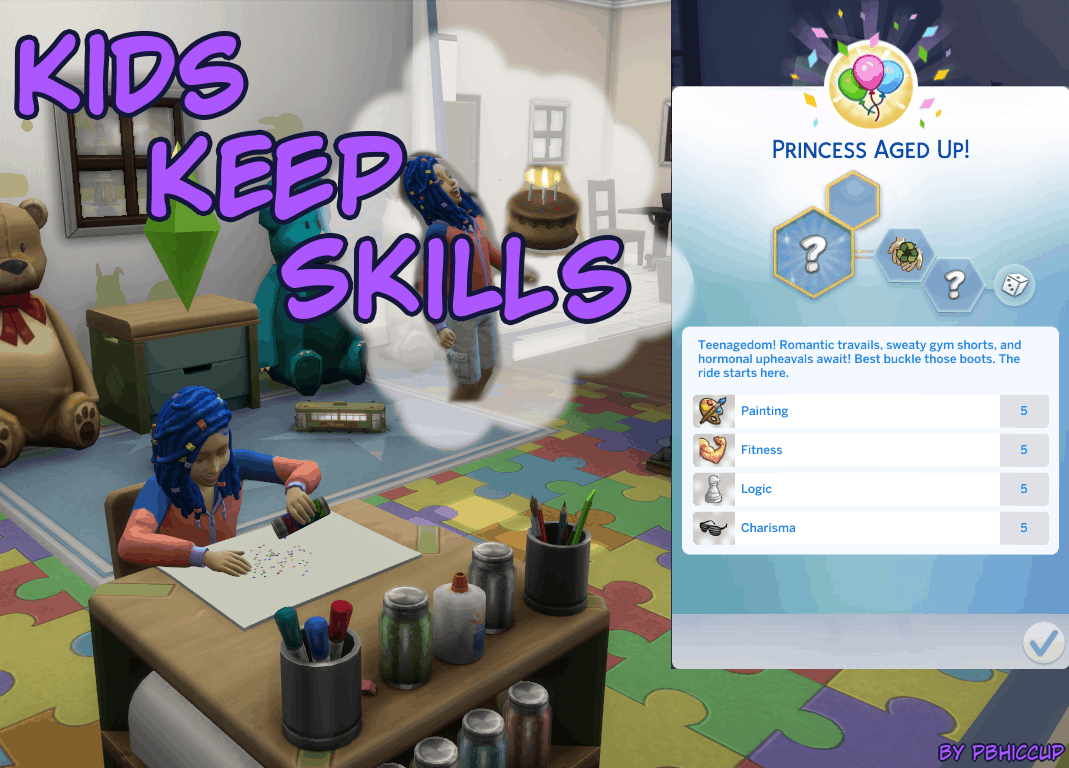 What it does:
This simple little mod allows children’s skills to actually mean something when they age up into a teen. No longer will those 7 motor skill levels go to waste on their birthday, instead, they’ll be put towards the equivalent adult skill when aging up to a teen.

But why?
Hasn’t it ever infuriated you that the Toddler Skills evolve to help with Children’s Skills, yet when that rambunctious social butterfly ages into a teen, suddenly they can hardly speak, and god forbid they set foot on a treadmill, right? I know it bugged me quite a bit, especially since the only way to build adult skills as a child is to totally max the child skill out and “Ain’t nobody got time for ‘dat”. So I decided if there was ever a reason for me to learn to mod this game, it was for this specifically.

Known Issues:
-When hovering over the skills gained on Age Up Trait Selection screen, dialogue is same as toddler dialogue
-When maxing a Children’s Skill, the notification pop-up still says the Logic (for Mental Skill) and Charisma (for Social Skill) can now be learned, even though that has been removed since they will achieve these on Age Up

Future Planned Updates:
Fix the two dialogue issues mentioned (I literally have no idea where to find that and change it)
Allow kids to learn other Adult Skill as children (i.e. fishing, programming, etc…)
Allow kids to interact with certain items to gain skills (again, like adding in the possibility to program or run on a treadmill)

Which roughly equals out to each level in the Child Skill equating to half a level of the adult equivalent, meaning a max skill will give just over level 5 to the adult skill.