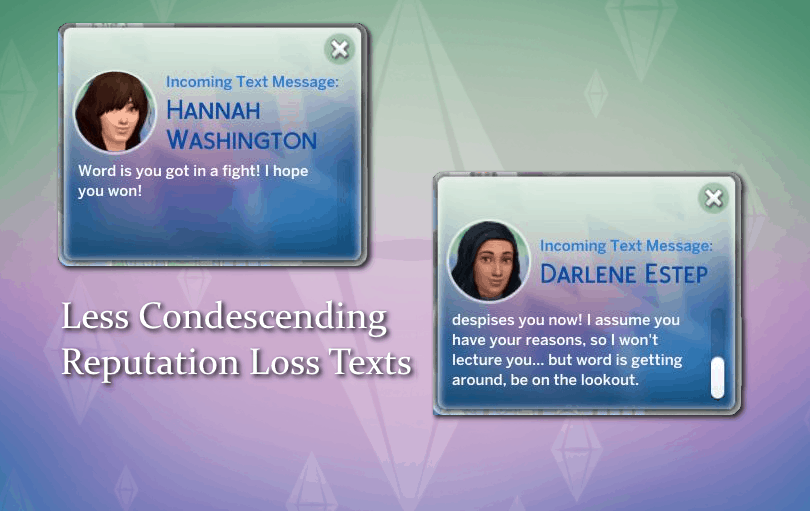 If you’re a storyteller in Sims like I am, you doubtless get in occasional fights. Sims sometimes dislike you, even despise you, and the feeling is mutual. But in my case, this is always for a good reason, whether it be standing up for friends, fighting off troublemakers, or just giving someone who’s caused you grief a good lickin’.

I always found it odd when friends, people who know you and like you, take the opportunity of a Sim disliking you to scold you sanctimoniously — even when it’s a Sim they also dislike (and calling them an acquaintance while doing it!). It just shatters immersion for me, especially since many of my friends have also been in fights, sometimes with the same Sim they’re scolding me for fighting! So, following the tradition of my previous two mods, I made a mod to change a mild annoyance of mine that is ultimately inconsequential.

Instead of the finger-waggy, sanctimonious, shame-on-you texts you’d get before, Sims are far more forgiving and understanding of any transgressions you may have made. This only replaces three of the possible reputation loss texts you can get; a Sim disliking you, a Sim despising you, and fighting another Sim.

Disliking a Sim is changed from “An acquaintance was telling me how much they dislike you… Try being a little nicer – becoming disliked is a slippery slope!” to “Hey, I heard someone dislikes you now. It’s none of my business, but be aware that they’re talking bad about you.”

Getting in a fight is changed from “Word on the street is that you’ve been getting in fights… You’d better clean up your act, or you’ll wind up with a terrible reputation!” to “Word is you got in a fight! I hope you won!”

I didn’t change any others because the negative tone is fitting for those; neglecting a child, neglecting a pet, stuff like that. In that case, there’s no good reason for it. There is, however, a good reason to fight some Sims. Looking at you, Vlad.

You still lose reputation, so in that sense, it might be a bit odd to have a friend saying they hope you won a fight contrasted with reputation loss. The reputation system can’t account for context; this attempts to rectify that in a way, however inconsequential.