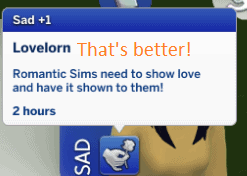 Am I the only one that was peeved off by the discrepancy between the Romantic trait’s description and what it actually does? I was promised a Sad moodlet when the Sim had gone too long without being romantic, not a Tense one! So, I fixed it. Now, it’s a Sad buff as god intended.
Note, the mood is the only thing I changed. The trigger or length are unchanged. While the buff reason erased itself, I’m sure that’s no big deal.

This mod overrides only the XML regarding the Lovelorn buff, so only a mod that changes said buff specifically will conflict with it. This means, for example, custom conflicts with the Romantic trait itself will work fine!

Additional Credits:
The fine folks who made Sims 4 Studio!
User MizoreYukii for addressing a problem I was having while creating this.