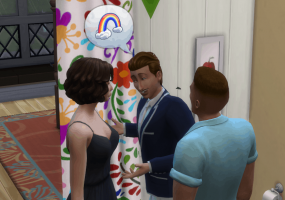 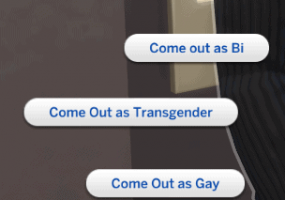 UPDATE: Should be compatible with 1.63!

Your sims are coming out! This mod used to be on my tumblr but now has a new home here! Some changes have been made to the text (just small things like parentheses) and I made a few preparations for future updates I’m still trying to figure out how to implement.

This is not a big mod and is meant for more storytelling than a complete overhaul of how sims act/live, so my apologies in advance if you are expecting a big overhaul. The mod is small for maximum freedom for different play styles and stories and best used alongside mods that do provide a stronger control on sims’ lives.

Here are the interactions:
Come Out as Gay/Bi/Transgender: These 3 Friendly interactions function the same for now (but not forever ;3), but with different text. Sims can come out as any of the three as many times as they like. These are non-autonomous, so sims will not come out unless you want them to. Depending on the outcome and traits, the sim coming out will gain a +5 Happy, +5 Confident, +10 Sad, and/or +5 Angry buff for 3 days (Coming Out is a very emotional thing!), with the exception of the Angry buff which lasts only 4 hours to avoid any potential deaths for those with emotional deaths enabled. Sims who were come out to will, depending on the outcome, receive a Happy, Sad, or Angry (all +3) moodlet.

Tell Coming Out Story: After coming out, a sim will gain the Came Out trait (which is visible for convenience), which grants the ability to tell their coming out story (a Friendly interaction) and gain a +3 Inspired moodlet for 24 hours. This is autonomous but I can change that if that’s troublesome.

Express Acceptance: Sims wishing to express their acceptance to sims who have come out can use this Friendly Interaction. If they’re considerate and succeed in the interaction, both sims will get a +2 Happy moodlet for 12 hours; however, if they fumble their words in a way that presents as insensitive, they will receive a +2 Sad moodlet for 2 hours and the sim they made uncomfortable will gain a +4 Embarrassed moodlet for 12 hours.

**NEW** Coming out as gay to a partner in a heterosexual relationship will cause 24 hour long +5 sad buffs for both parties.

Compatibility:
This mod uses all new resources and does not touch any in-game files, so this mod should not conflict with any other mods.