For The Alliance Custom Career Mod 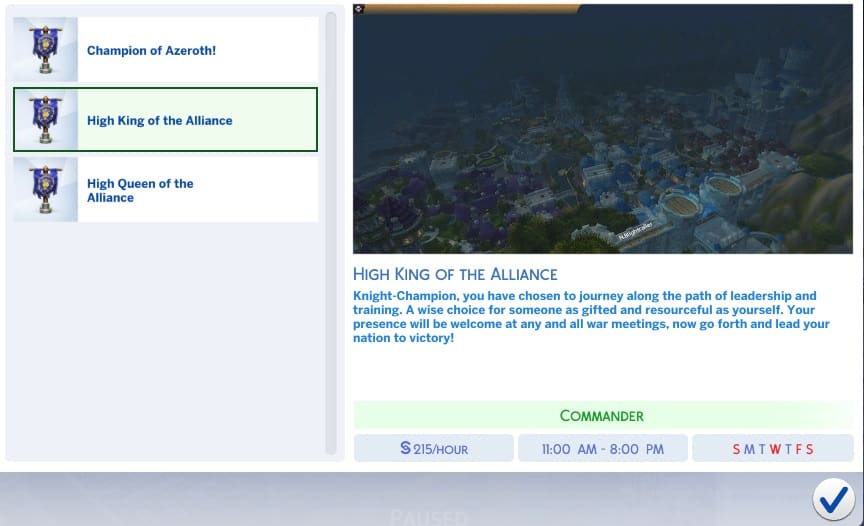 For The Alliance Custom Career Mod

For The Alliance is a 9 rank Career with 2 (3) Branches suitable for base game and beyond. I created this upon request to go along side my For The Horde Career Path so the RP descriptions may be lacking as it isn’t my primary faction. All images used are my personal screenshots for originality .

For The Alliance
The Alliance calls for aid!
The savage Horde is marching across our land once again, covering the scorched earth in the blood of our kin and destroying homes and farmsteads in their wake.
Do you have what it takes to protect our lands and fight back the unrelenting force of their tide or will you be crushed beneath the marching feet of the brutish Orcs as they slaughter everyone you once loved?
Take up arms Recruit and give them no mercy, for the Light will always vanquish the dark.

•Private – MTWTF– $50PH
Wet behind the ears and barely able to hold a sword, let alone swing it! You will train on the front lines and prevail victorious, Recruit, for the Alliance will never lose to savages!

•Corporal – MTWTF– $60H
You’ve done well and your services has been noticed. You have gained the trust of your Sergeant but your promotion means more work, Recruit. Ensure your brother and sisters-in-arms are ready at all times and try to deal with any problems that arise.

•Sergeant – MTWTFS- $75PH
Recruit, or should I say Sergeant Recruit, you have done well. You have walked away from every skirmish you have encountered. You have dealt with petty squabbles and gained the respect of your peers enough that they believe you can lead by example. Don’t prove them wrong now!

•Master SergeanT – MTWTF– $80PH
You can lead just as well, if not better, than you can fight and your commanding officers trust your way of strategy and leadership that they are giving you this chance to truly make a difference in the fight against the Horde.

•Sergeant Major – MTW–SS $95PH
Congratulations Recruit!
Sergeant Major comes with many perks, but is this the path for you? You know the enemy better than they seem to know themselves and you show this in your briefings, strategic talks and training. But the Horde is getting stronger, their attacks are more wild and unforgiving and your knowledge is going to be tested every day from here on.

•Knight – -TWTFS- $105PH
The poster child for leading by example. Your achievements have been noticed and your services recognised. You have been Knighted as a true soldier of the Alliance.

•Knight-Lieutenant – MTW–SS $115PH
Your progress is unstoppable. You gain control of your own small squad and gain increases in responsibilities and infantry duties, such as command and control elements not to mention weapon training posts.

•Knight-Captain – MTWTF– $180PH
Your name carries more weight than your Rank, Recruit!
Your small task force has increased from 60 to 200. Your duties now include teaching strategy along side weapons training, yet you long to get back to the front lines and continue to lead by example!

•Knight-Champion – MT-TFS- $215PH
From Private to Knight-Champion, you have seen it all. You have reduced the Horde numbers and allowed the Alliance to gain footholds across the land. You have taught some of the strongest and best and yet still remain undefeated in both the training rings and the battlefield. But this isn’t the end. You now get to decide which path you follow for yourself… Do you resume leadership or will you sweep the nation clean of the Savages?

By finishing the Knight-Champion rank you unlock 2 (3) Branches as shown in the images above. High King / Queen of the Alliance and Champion of the Alliance. (I wasnt sure how to make the High King gender specific like Warchief hence the Queen branch. Both are identical in every way except title)

High #### of the Alliance!
“Knight-Champion, you have chosen to journey along the path of leadership and training. A wise choice for someone as gifted and resourceful as yourself. Your presence will be welcome at any and all war meetings, now go forth and lead your nation to victory!”

•Commander – MT-T— $215PH
With a single word you can now send entire bodies of troops to war against the Horde. You lead from the back, watching the fight unfold as you predicted and revel in the glory of every fallen Orc, Troll and rotting Forsaken corpse.

•Grand Marshal – -T-TFSS $330PH
You have earned the utmost respect from the Night Elves, Dwarves, Gnomes and Draenei. You have lead your armies into glorious battle and the Stockade is full of criminals who could not escape your grasp. Grand Marshal is a title few can ever aspire to, but you have earned it with pride.

•Supreme Allied Commander – M-WTFS- $380PH
The Horde has been pushed back to their primitive dwellings and the Allied lands remain safe once more all thanks to you. The combined forces have recognised your leadership and authority and nominate you Supreme Allied Commander. With you at the right hand of the High King, the war is almost over but this is still no time for peace…
For a cornered beast is always the most dangerous.

•High King/Queen of the alliance – MTWTFS- $500PH
The High King is dead. Forsaken Assassins infiltrated the Castle and slaughtered him and his entire family family. The nation is in mourning, but with no surviving heir, all eyes turn to you for guidance and leadership. You have shown patience in combat and have lured the Horde forces into strategic traps rather than waste lives in full frontal assaults. You have united nations and restored bonds long since worn thin from infighting. This title is a heavy one, but it is one you will wear with pride.
With you leading from the top, this war ends now.

Champion of Azeroth
“Knight-Champion, you crave the feeling of bone crushing beneath your feet, of taking the fight to the enemy and you vow to vanquish the horde by your own hand. Venture beyond the battlefield and take the fight to them directly!”

•Champion of the Eastern Kingdoms – MTWTF– $200PH
With Sylvanas residing in the once glorious Lordaeron and her blight slowly spreading over Hillsbrad, it is up to you to rally the forces of the Gnomes, the Dwarven clans and Worgens into a unified front as you regain a foothold and take back the land from the Banshee Queen!

•Champion of Kalimdor – MTWTF– $200PH
With the Night Elves residing in some safety of Teldrassil, the Horde have taken this opportunity and have started branching into Ashenvale. With the Tauren, Orcs and Trolls slowly taking the lands, it is feared this continent will soon be under full Horde control.
Prove them wrong!

•Champion of Outland – M-WT-S- $210PH
The Dark Portal has opened once again and the Draenei have passed on the message that there are survivors residing in the land they fled from. Will you go forth and lead a rescue team? Will you manage to combat the new forces you will face in a land destroyed by corruption?
Will you be prepared?

•Champion of Northrend – MT-T-S- $220PH
The scourge invasion has increased. Only this time, the banshee queen is not to blame. Ghouls and worse have been attacking stormwind and growing in numbers by the day. It is time to put a stop to this. It is time to travel the same path one before you never returned from… Northrend awaits and the Lich King stirs upon his frozen throne. May the Light wash over you Champion, for you will face a battle unlike any you have witnessed.

•Champion of Pandaria – MTW–SS $245PH
Prince Anduin has disappeared during a naval battle with the Horde, his ship is destroyed and It is up to you to find him and to beat the Horde to the new land slowly appearing from the mist. Find Anduin and be Ambassador for the Alliance and help the natives prevent the Horde from destroying and taking over another land but be careful of your emotions. There is darker things than Garrosh lurking in the shadows of this place.

•Champion of Draenor – –WTFSS $250PH
Garrosh has managed to flee through space and time to an alternative Draenor thanks to the help of the black dragon Wrathion and the bronze dragon Kairozdormu. Rebuilding a new Dark portal he plans to lead his Iron Horde back home and take Azeroth for himself. It is up to you to go through this new portal and meet this new army head on. Disable the portal at all costs and put an end to this madness before it is too late!

•Champion of Broken Shore – –WT-SS $345PH
Gul’dan has lead his demon army into Azeroth. The truce between factions crumbles when the Horde flees the battle causing King Varian to die. Attacked from two sides, it is up to you to lead the fight against both the Horde and the Legion armies. Find the legendary artifacts and put an end to the invasion before Azeroth is turned into a wasteland.

•Champion of Kul’Tiras – MTWTF– $400PD
Sargeras is defeated, but in his last act of spite he greatly wounds Azeroth. The titans blood – Azerite –, which contains great magical potential, is now leaking into the world and both factions want it for themselves. Will you aid Jaina Proudmoore in her campaign? Will you Fight back the Trolls of Zandalar or will you succumb to the old gods?

•Champion of Azeroth – M-WT-SS $500
Victory for the Alliance! You have journeyed far and hard Recruit. You have travelled through time and space. From Old Gods to savage Orcs, all have fallen beneath your blade and fled from the Light. The battles may be over and you may have won, but now is not the time to rest. Go forth Champion and cleanse the final traces from your world and defend what you have saved.

Just unzip and drag all 3 files into your mod folder and away you go (the zips include Neia’s Career Package!)
This is my 2nd career so all feedback is welcome!